Okay, so haven’t been posting as much as before, but I will be bringing back some regular features (like a weekly story again), as well as doing another daily story for a short while, maybe telling a specific tale.  Anyway, I’m still plugging away at this Encyclopaedia (so close to finishing the text of it it’s unreal!).  So here’s a peak into it, and a little something for everyone, as well as some peaks into the Core themselves (those bastards). 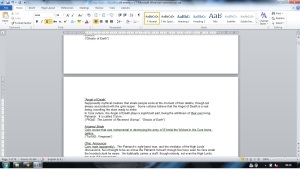 Does anybody have any requests for random entries in the Encyclopaedia (with a Contributor’s tag of course).  There’s no artwork yet as I’m a terrible artist!  But eventually it will be in full colour, even hardback!

Ooh, also I have my proof copy of The Case of The Empty Killer!!!!!  Hoping to release this soon!!!!!

4 thoughts on “A little something….”