Day 30, and it’s the penultimate entry for January!  Bet you were thinking it was about poncy necklaces and things, weren’t you?  Good, then this will be a surprise… to a certain extent!  One more to go after this one, and then onto February and the random Encyclopaedia entries, some of which aren’t in the books, so I guess you could call it exclusive content!

Shadows moved through the grass.

Their target was ahead, part of a column of machines, riding out in the open.  He was mounted on a mechanical steed, arrogantly daring anyone to take him on.  War machines travelled behind him, the frontline troops marching nervously either side in columns.

Like all frontline troops who served the Magistat, they were conscripts, forced to serve as cannon fodder against the Magistat’s enemies.

The leader himself had become a nuisance to the intergalactic community.

He was sending over-powered high-yield ballistic missiles into space that were striking passing shipping.  He had declared himself ruler of the universe, just as soon as he left his little planet and conquered everything else.

The machines he rode with were transports, carrying the last few pieces of an interstellar rocket that could launch his armies into space and beyond his conquered world.

The shadows were all around, waiting in hiding.

Some immediately struck at the rear of the giant column, taking down the meagre rearguard in seconds, the soldiers dead before they hit the floor.  The rest of the column were unaware, the Magistat’s arrogance keeping his belief of his own superiority.

The machine at the rear of the column carried parts for the rocket’s engine.  Shadows in mottled camouflage assaulted the cockpit in silence, slaughtering the crew and its elite guards.  The machine stopped, and the shadows jumped off, disappearing easily into the long grass that swayed about around the Magistat’s men.

The transport, easily a hundred metres long, exploded from the centre out.  It had no fuel in it, which would have been injected at the launch, but it still made a hell of a bang, the thunderclap turning heads all along the column, and the shockwave rushing down them.

There were cries of astonishment from the Magistat’s flunkies, and fear from the conscripts.  Their war had come early, and not in a good way.

Dozens dropped, as suppressed flashes lit in the grass, and bullets ripped conscripts apart like wet paper.  The shadows moved again, assaulting the column from both sides.

The Magistat, atop his whirring hissing steed, watched as the shadows coalesced into figures.  They wore camouflage uniforms, plastered in local vegetation that obscured their outline and blended them in with the grass.

They were firing similarly solid-round weapons as his own, but were rapid firing, hundreds of bullets flying.  He pulled a pistol and stood his mount among his bodyguard, similarly dressed as him.

It was the first time he had felt real fear for his life.

It was also the last time.

“No. 2 Squadron, pin those bodyguards down,” the company commander ordered.  Captain Malfarn was leading the charge, assault rifle to his shoulder, whispering orders through the mic on his throat.  “Take them out if you can.”

“The one with all the jewellery,” he answered testily, refusing to add any curses to describe the idiot that asked the question.  The briefing had been clear.  The Magistat had an arrogant streak a light-year long, and a tendency towards outrageous fashion, including bright gold jewellery that would have cost Malfarn thirty years’ wages.  “No. 4 Squadron, take that artillery piece before they decide to get their wits together and realise it actually fires things.”

“Does it even have any ammunition available for it?” somebody asked.

“Probably not, but if you don’t take it out, I’ll fire you from it.”

The Magistat and his bodyguard turned to meet the threat of the emerging soldiers.  The dictator started taking potshots at anything that moved, even if it was his own conscripts.  Fear and rage set in him.

A single armour piercing round punched clean through the disk of the medallion he habitually wore around his neck, slicing through his chest, and dropping him to the floor, dead before he left the saddle.

As the bodyguards shouted and panicked, Malfarn saw the sniper team responsible move through the grass.

This was the life.

The life of a Royal Marine. 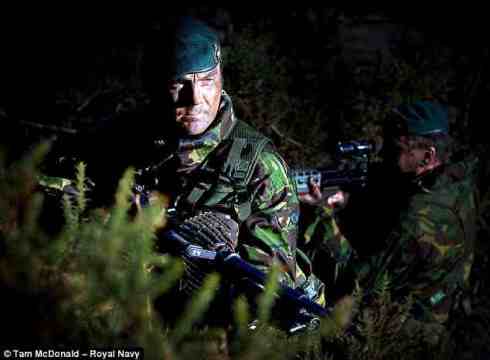