Day 19 and it’s my birthday today!  AND to coincide with this story AND my birthday, the character in this one is also in Thicker Than Snow, my short story that’s just been released on Kindle!!!  So this is another brief glimpse at World War Three!

“Put a sock in it,” a voice answered unseen among the group.

The C-130 Hercules’ tail door was fully open, ice-cold wind blasting in through the opening.  The crew chiefs were wrapped up enviously warm, but their passengers were equipped for warm weather combat.

They hadn’t expected this weather, an unforeseen complication in the last great push to Shanghai.  A blindingly bright flash filled the sky behind the Hercules and its ninety-three compatriots, the shockwave blasting the clouds aside in the distance.

Major Pasch knew a nuclear detonation event when he saw one.  He’d seen the People’s Liberation Army sling a few nukes already and it was never pretty.  Now it seemed as if, since the fall of Pyongyang two days before, they were firing in desperation at anything that moved, trying to stop the Americans, British, and the other Allies from reaching the final battle.

The Hercules shook, but didn’t fall out of the sky.

His earpiece squawked at him.

The compartment’s lights turned red, bathing the troops crimson, preparing them for the inevitable jump.

Pasch’s SAS squad was attached to a company of Paras, and their company commander stood up and started bawling orders, the squad sergeants joining him.

“Alright all of you, this is it!” he shouted.  “Up and into it.  We have thirty seconds before the jump!”

The Paras all jumped to their feet, making their final equipment checks.

Pasch’s squad stood near him, cool calm and collected, ready since the moment they had boarded in Tokyo.  They earned the occasional awed look from the Paras they had been assigned to, their unit’s reputation preceding them.

Pasch put a hand on his shoulder to steady him.

“This is what you have been trained for, Captain, what we all live for.  You and your Paras may not be SAS, but you sure as fuck fight like us.”

He sprinted for the ramp and leaped out into the clouds, followed closely by his squad, the crew chiefs having not given the ready sign to jump.

He pulled his parachute and joined the thousands of British, American, French, German, Russian, Italian, Spanish, Japanese, and Australian soldiers that fell towards Shanghai and the last battle of World War Three. 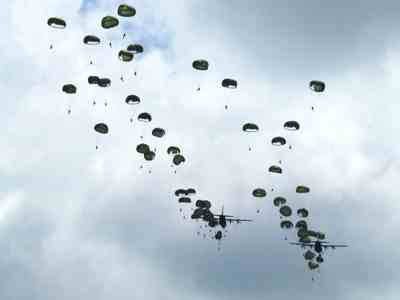