So, it’s 1st January 2014, and the first day of the challenge.  Not quite sure what I’ve let myself in for, but there’s been loads of interest on Facebook, which was kind of a surprise! Anyway, the first one is “12.01am”.  Anyone else doing this, you don’t have to use the challenges as the titles, but I am, making the actual story a bit of a surprise for anyone reading!

And yes, this is all part of the Nineteen Galaxies!

Ana was late for the party.  She hurried through the streets of Central New Amsterdam, weaving past the pedestrians around her.  She had seen it busier of course, but that had been a few years ago, before the dark times.

She ran up to the next level, realising belatedly she was next to NTPD Headquarters, before crossing the massively wide thoroughfare, the traffic passing underneath the walkway.

Her taxi had left her on the wrong street, and now she had to run the two blocks to the party, despite her already being tardy.  The clock would tick over soon, and she would miss the whole shebang.

Why was this her luck?

Sweating, she ran up to the next level again, and found the door she was looking for.

The night-club pounded and thumped, even from outside, even in the shadow of the planet’s Police force.  She glanced over at the NTPD cruisers clamped to the walkway, their lights already flashing.

The bouncer, eight feet of slabbed muscle and flat face, nodded to her, and opened the door for her.

“Thankyou,” she said as sweetly as she could through the wheezing.

She walked in, trying to tidy herself up.

She was too late.

She sighed, and ordered a strong drink as the room erupted into cheers and celebration. 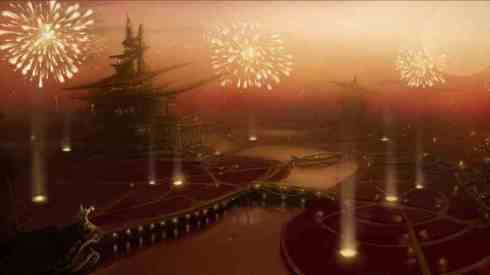